Paying monthly mobile overage charges is becoming increasingly burdensome for consumers as they continue to consume more in the way of mobile video and other forms of data-hungry content. Six point six percent of mobile Android consumers were billed for overage charges in 2Q 2016, Nielsen highlights in a Nov. 22 blog post about WiFi vs. cellular usage patterns.

Delving deeper into mobile data consumption to discern patterns across market geographies and a variety of demographic groups, Nielsen’s Mobile Performance Panel reveals differences that provide mobile service providers with an opportunity to improve customer service and satisfaction by tailoring data plans according to specific consumer usage, needs and demands.

WiFi Vs. Cellular Usage In bids to avoid mobile overage charges, many mobile subscribers connect to WiFi networks, consuming more than three times as much WiFi data as cellular, according to Nielsen. In addition, 10 percent of those billed for overages during 3Q said they considered switching providers in order to get a better deal on mobile data.

Unsurprisingly, Millennials 18-24 years old are most likely to be heavy consumers of mobile data. Upon entering the workforce they begin to consume more cellular data than their younger counterparts, according to Nielsen. 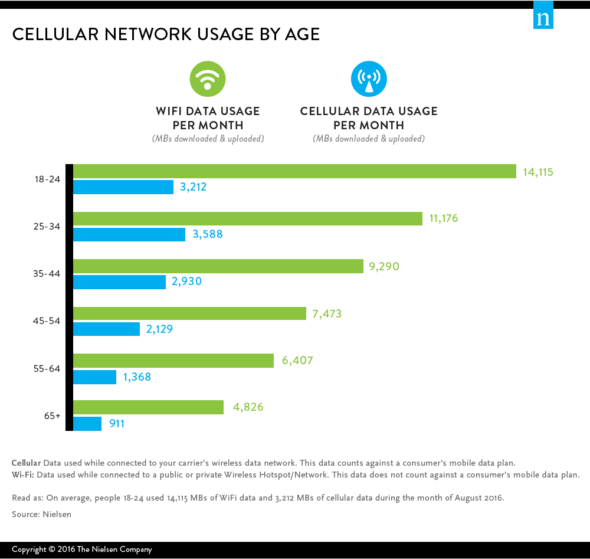 Examining differences among ethnic/cultural groups, the market research provider found that cellular data accounts for more than one-third of Hispanics’ mobile data consumption, more than any other group.

Hispanics also have the highest level of satisfaction with their mobile service providers, and the population is growing fast, which means carriers should keep Hispanics ¨top of mind,¨ Nielsen points out.

Turning to other ethnic/cultural groups, Asian-Americans rank second in terms of WiFi data usage. Alaskan and Native Americans make the least use of WiFi data, and instead are heavy consumers of cellular data (1/3 of their total mobile data consumption).

Differences in weather also factor into differences in mobile data usage. Because they are outdoors more than their counterparts in colder climes, mobile subscribers living in warmer areas of the U.S. use more cellular and less WiFi data.